So after Mont Saint-Michel we drove another few hours to get to Saint-Malo, the ancient walled city in Bretagne.

The Malouins – the inhabitants of Saint-Malo – are known for their independence and sometimes rebellious nature. The city was founded in the 1st century B.C. by the Gauls under the Roman name(s) Reginca or Aletum. But in the 6th century the name was changed to Saint-Malo after a man named Saint Maclou; there was a monastery built during that time.

Saint-Malo has long been an inspiration for literature, ever since medieval times. Marie de France, a somewhat mysterious female author from the 12th century, wrote a poem called « Le Laüstic » that takes place in Saint-Malo. I’ve attached a link to the translation if you care to read it .. I studied it my freshman year of college in my first French class, with a professor that I really admire but it now retired .. it’s worth a read! Recently, I had read a book, “All the Light We Cannot See” by Anthony Doerr (highly recommend this one as well!) that takes place there, and I was excited to finally see it myself.

Saint-Malo’s history is also deeply connected with that of the corsairs, the French privateers and part-time pirates of the 17th and 18th centuries. Theoretically, these men and sometimes women were hired by the French Crown to attack the ships of French enemies, while respecting the French ships and those of neutral nations .. if they didn’t, which happened often, they were known as pirates and hanged accordingly. In 1144, Jean de Châtillon, a bishop, granted Saint-Malo the status of ‘rights of asylum’ which encouraged thieves and rogues to move there .. their motto was “Neither Breton, nor French, but Malouin!” In fact, a famous Malouin was Jacques Cartier, credited as the discoverer of Canada. From what I could understand from our tour guide, Saint-Malo became a very wealthy city because all the corsairs were backed by the King – as “official pirates,” they were granted permission to go “coursing” after enemy vessels in return for a percentage of the profit from captured ships, hence the name.

Sad to say, I didn’t meet any pirates, but if I did, I probably would have joined them. And also sad to say, Saint-Malo is no longer in its prime. We stayed just outside the city and there was a stark difference  – it was more industrial but also even more empty than the walled city itself. Hardly anything other than a few hotels, maybe a supermarket. And inside the walls of Saint-Malo, we were practically alone on the quiet streets that our tour guide took us through. The main lookout and center square were bustling, but you get the feeling that once the tourists leave for the day the town is desolate. Perhaps it’s different in the summer.

Nevertheless, I liked it. While at Mont Saint-Michel I could only see the sand, at Saint-Malo I saw the ocean, and went in ! It was windy and a bit chilly because the sun had gone behind the clouds, but the water was so refreshing. I felt alive in the waves and in the smell of the salt water .. and could imagine for some moments that the sailors and corsairs of so many generations had seen that same view, sailed that same water. The sea was calling me !! 😉

On the ramparts, our tour guide told us about Saint-Malo during World War II. In early autumn 1944, Saint-Malo was almost entirely obliterated by American bombs and British naval gunfire; the Allies believed that the Axis powers had thousands of troops and a considerable supply of weaponry within the walls. In reality most of the Axis defense was outside the city walls. Saint-Malo was then rebuild between 1948-1960; in walking through the city we saw some of the original streets and buildings that had survived the bombing. The story I mentioned above, “All the Light We Cannot See,” takes place largely in Saint-Malo. I wanted to reread it in imagining the scenes, now that I can place them visually. I found a bookstore on one of the busier streets, and I actually found a copy in French !

For all its tourism, Saint-Malo has a sort of melancholy charm. The stories of the corsairs and vagabonds, sailors and soldiers, are still alive within its walls. And just like the sea’s tides go in and out, I guess so too does the history of Saint-Malo : bustling one day, bleak the next .. always independent, courageous. 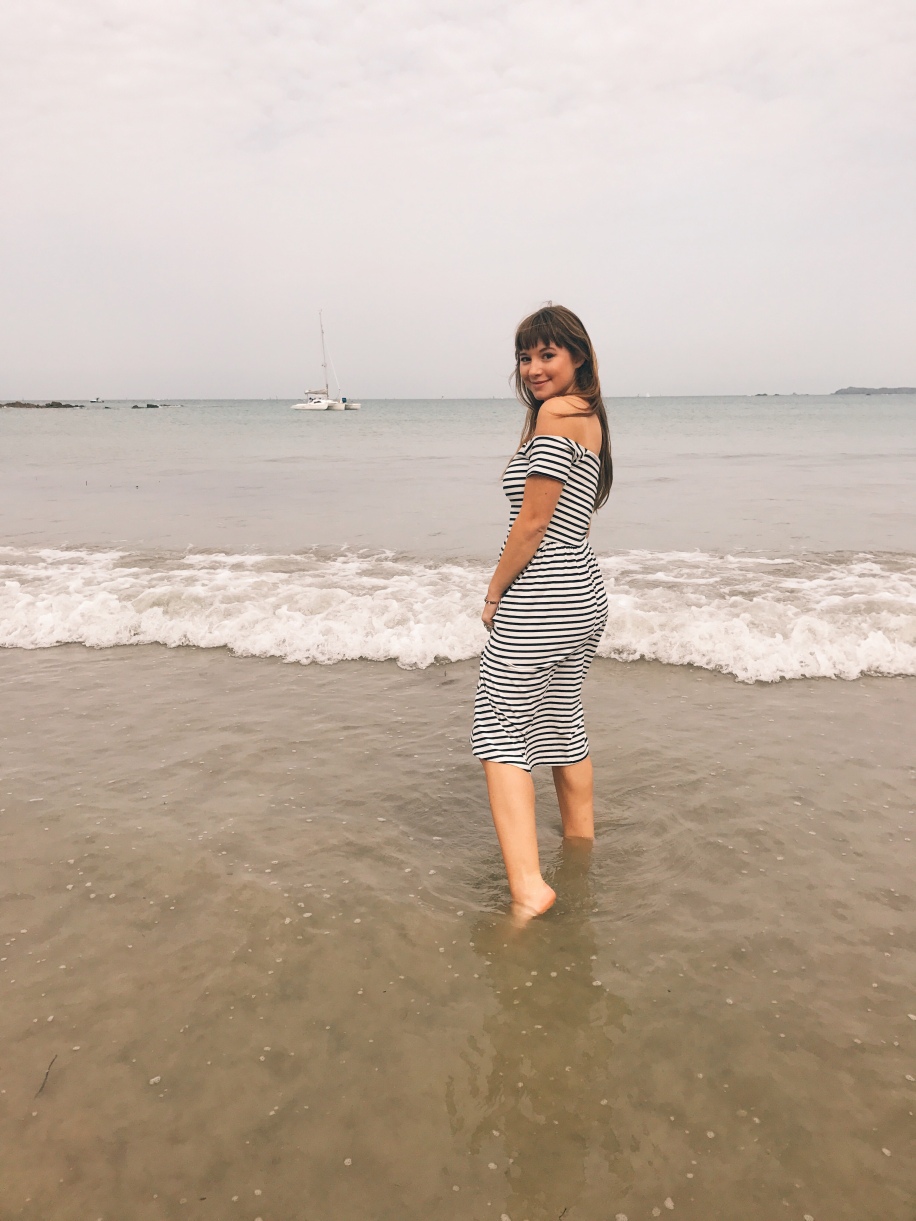